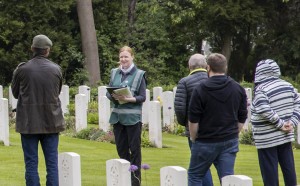 On the 5th / 6th / 8th March for International Women’s Day, the Commonwealth War Graves Commission (CWGC)  we will be putting the spotlight on some of the female casualties buried at the site. This is a completely new tour about casualties we’ve not spoken about before.

Sister Florrie Prest from Bilton is just one of the female casualties at Stonefall cemetery, who will feature in the tour.

On the 12th / 13th / 14th March the CWGC will be highlighting the casualties from East Africa, Fiji, the Caribbean, Canada, Australia and New Zealand who are buried at Stonefall Cemetery.