This page contains news articles and other items in the media.

Catch up with some of the latest articles from:

Harnessing the benefits of older workers

What would it take to make an age-friendly city?

Planned, multi-generational communities might be great for those who can afford them. The rest of us need cities better equipped for older people. Read more …..

Patients and staff shut out of NHS transformation plans

‘NHS England has told local health leaders not to reveal the plans to the public or the media until they are finalised and have been approved by their own officials first, according to published documents and a new analysis by the King’s Fund. The national body even told local managers to refuse applications from the media or the public to see the proposals under the Freedom of Information Act’.

10 Ways to be a fabulous grandparent

Suggestions about what it takes to become a favourite with your grandchildren.

Britons at 90: healthier, wiser, more independent – but it helps if you’re rich: As the Queen celebrates her birthday, she joins a growing number of people living – and thriving – in very old age. So what makes a happy nonagenarian?

Loneliness linked to 30% increase in heart disease and stroke risk:  In findings which compared the effects of loneliness with recognised risk factors,such as anxiety and a stressful job, researchers said that their analysis backed up public health concerns about the importance of social contacts for health and wellbeing.  Read more ….. 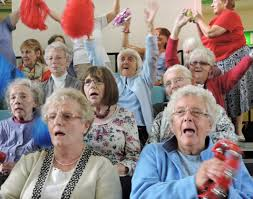 Singing in choirs and helping children read helps maintain older people’s mental wellbeing: the National Institute for Health and Care Excellence has published recommendations on supporting older people’s mental wellbeing and independence. These include such things as singing groups, in particular, those involving a professionally led community choir plus arts and crafts and other creative activities.  Follow this link to read more.

Four hugs a day – Campaign to End Loneliness Guest Blog  Should we have rights to minimally adequate access to decent social connections or to contribute socially?

There is evidence that a regular visit for older people from a friendly face reduces pressure on the health service.  Read more …..

‘Every day was a happy day‘. Follow this link to hear some of the people who participated in Love Lived, a collaborative exhibition combining video and photographs capturing their stories and thoughts about love on Valentines Day.

An inspiring interview with 93 yr old Bob Lowe combating loneliness on Breakfast TV today (16.1.2016). To read his poem ‘Ode to Kath’ and find out more about Bob and Kath, click here to access an article which appeared in the Daily Mail in 2014.

.Older People in Society – catch up with the latest selection of interesting articles   from the Guardian.

Care leaders say that vital care services for older and disabled people in England remain at risk despite government attempts to protect the sector. Read more.

Campaign to End Loneliness – Connections in Older Age
Guest blog – Winter Loneliness: What can be done to prevent the rise?

Here is an opportunity to view this animation again as it’s worth another look….  Aardman and the Bristol Ageing Better (BAB) have teamed up to create a short film illustrating local older people’s experience of social isolation in the city, and what they can do to be less lonely. Click here.